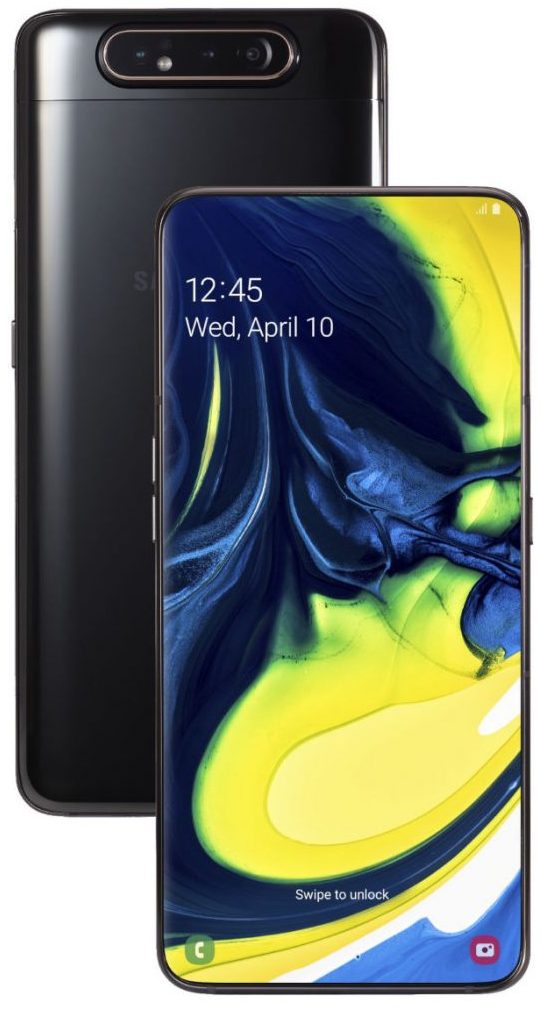 After the announcement of Samsung Galaxy A70 last month, now the tech giant Samsung announced the smartphone Samsung Galaxy A80 in Thailand at 649 Euros (US$ 729 / ₹ 50,445 approx.) and adds one more member in the A-series.The smartphone comes with rotating camera and slider mechanism, said to be the first from the Samsung’s camp.
The smartphone Samsung Galaxy A80 with 3D Glass body and a metal frame sports 6.7-inch Full HD+ 20: 9 Super AMOLED display with the resolution of 2400 x 1080 pixels. It has 8GB RAM, internal storage capacity of 128GB. It has dual-SIM functionality and dimension of 165.2 x 76.5 x 9.3mm. It also features an in-display fingerprint scanner.
It is armed with Octa Core (2.2GHz Dual + 1.8GHz Hexa) Snapdragon 730G Mobile Platform with Adreno 618 GPU and runs on Android 9.0 (Pie) with Samsung One UI.

The users can get the Samsung Galaxy A80 in Angel Gold, Ghost White and Phantom Black colors. It will be available in Europe from the second-half of May, but the company hasn’t confirmed the date of its launching in Indian market yet,it will be known soon.