Oppo K3 hands-on images, specifications leaked ahead of May 23 announcement

After the confirmation of the announcement of the upcoming smartphone Oppo K3 on 23rd May in China , the hands- on images revealed on Twitter and also some of the specifications of the device released by the company  on its official Weibo page.It will be the successor of the Oppo K1 that was announced in October last year. 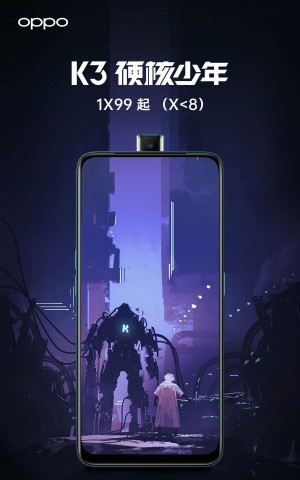 As per the leaked report, the Oppo K3 will sport 6.5 inch bezel less AMOLED display with 1080×2340 resolution. It will come with 8GB RAM, internal storage capacity of 256 GB and it will also feature an in-display fingerprint scanner.

It will be armed with Qualcomm Snapdragon 710 octa-core processor and will run on Android 9 Pie based ColorOS 6.0 UI.

It will be backed up by 3765mAh battery with VOOC 3.0 flash charge.

Connectivity wise, it will incldue 3.5mm audio jack and USB Type-C port on the bottom.

There is expectation that the smartphone manufacturer is likely to announce two variants of Oppo K3 with 6GB nd 8GB RAM and the base variant 6GB RAM will be priced at 1799Yuan.

The Oppo K3 will be available in White, Green and Purple colors.

To know the exact information related to the specification and its availability , we have to wait few more hours for its announcement.