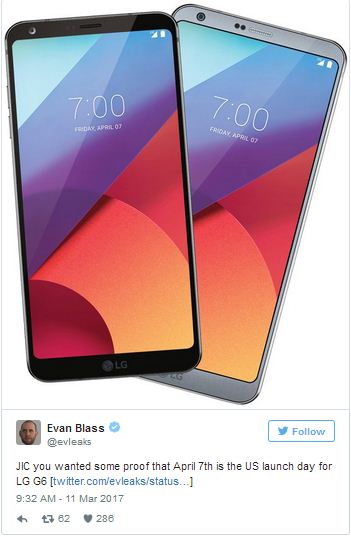 The South Korean smartphone manufacturer LG G6 has already decided to launch its latest device LG G6 in Australia and Israel, now according to Evan Blass at Eveleaks, the Company is likely to target the US for its next launching on 7th April, 2017. He also added in his tweet that white version of the smartphone LG G6 will not be available for the US users.
Since, the company has already accepted 40,000 pre-orders for the device in its home town and it will be available from 22nd March.

It’s predecessor LG G5 has a metallic unibody with modular design sports a QHD IPS Quantum display of 5.3” with the resolutions of 2560×1440 pixels, pixel density of 554ppi and covered with a 3D arc glass It is powered by the latest 64-bit Snapdragon 820 quad-core processor with Adreno 530 GPU and 4GB of RAM. It comes with the internal storage capacity of 32GB, which can be further expanded up to 2TB via a microSD card slot. The device supports dual-SIM dual standby. The device runs on Android 6.0 Marshmallow based LG’s UX UI.
The device includes dual rear cameras of 16MP with laser autofocus, dual-tone LED flash, 4K video recording support and the other is an 8MP sensor 135-degree wide-angle lens. It has also front-facing camera of 8MP for capturing selfie. It has the dimension of 149.4 x 73.9 x 7.7 mm and weighs 159 grams.
Connectivity wise, it features 4G-LTE, Wi-Fi, GPS/A-GPS, NFC, Bluetooth 4.2 and microUSB Type-C port. It also includes a fingerprint sensor for the security of the device which is situated just below rear camera of the device. It also features an Always-on display that shows the important notifications without switching on the screen.
It is powered by a 2800mAh battery and supports latest Qualcomm Quick Charge 3.0 technology. It comes with a unique slide out battery port at the bottom, to make the users to change the battery themselves. It has the modular design and be transformed into LG Cam+, Hi-Fi Plus, and 360 VR.