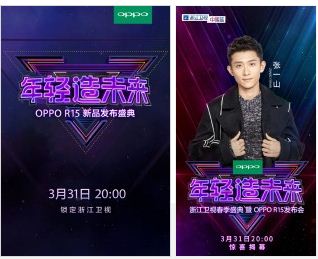 Recently, the smartphone manufacturer has already confirmed that the upcoming device Oppo F7 will be announced on 26th of this month. Now a latest rumor hit the web that one more smartphone Oppo R15 is likely to be announced just after 5 days, on 31st March. There is also expectation that the big brother Oppo R15 Plus is likely to share the same platform along with the sibling Oppo R15. The Chinese actor Zhang Yishan will be the brand ambassador of the smartphone.

According to the latest rumor, the device Oppo R15 will sport a 6.2-inch AMOLED screen with Full HD+ resolution (2280×1080 pixels) and 18:9 aspect ratios. The leaked image revealed that its display will feature an iPhone X-style screen notch. It will come with 6GB RAM, internal storage capacity of 128GB, which can be further expanded via microSD card slot. It will be armed with MediaTek Helio P60 chipset with octa-core 2.0GHz processor and will run on Android 8.0 Oreo with ColorOS 5.0.
The camera section of the unannounced device Oppo R15 will have a dual rear-facing camera setup with a Sony IMX519 sensor, including a rear camera of 16MP and a 5MP secondary camera with dual-pixel phase-detection autofocus and 4K video recording and front-facing camera of 20MP with ƒ/2.0 aperture. It will be powered by 3450mAh battery with the support of OPPO’s VOOC fast battery charging technology.