Acer Iconia One 8 (2018) specs and schematics revealed on FCC 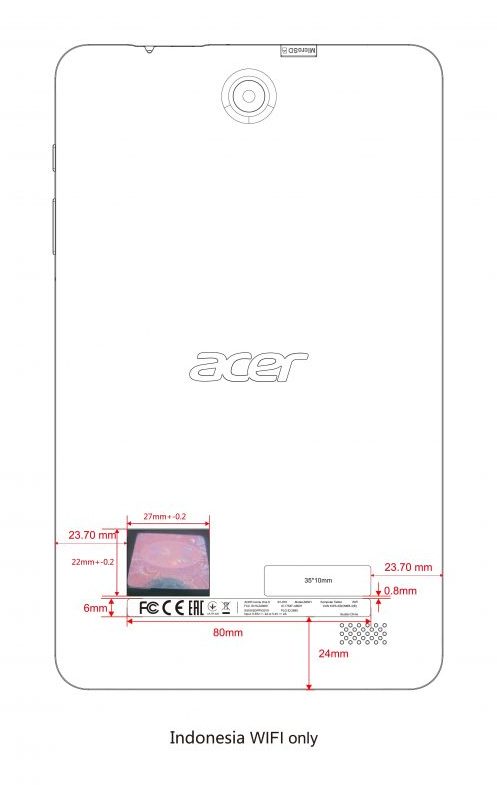 A latest Acer Iconia One 8 (2018) tablet passed the FCC certification and also revealed the specifications along with the schematics. Since, most of the smartphone manufacturers have ignored the production of tablets these days, while at the mean time Acer is taking interest in its manufacturing. It will be successor of the Acer Iconia One 8(2017) that was launched last year.

On seeing the leaked schematics, the upcoming tablet Acer Iconia One 8 (2018) shows not much change in designs compare to its previous models. There is expectation that the back cover of the device will be metallic with rounded or curved corners, it will have a centrally placed rear camera, a small speaker grille at the bottom right corner. Also a 3.5mm audio jack and the power and volume buttons seem to be situated at the top and at the right-hand side respectively.

According to the FCC listing, the unannounced tablet Iconia One 8 (2018) will have low-end specifications. It will sport 8-inch display with a resolution of 800 x 1280pixels, 1GB of RAM and internal storage capacity of 16GB. It will be armed with the1.3GHz MediaTek MT8167A processor and will run on Android OS, since the version of the OS hasn’t revealed.
The camera section of the tablet Iconia One 8(2018) will include a rear camera of 5MP and a front-facing camera of 2MP and it will be backed up with a 4500mAh battery.