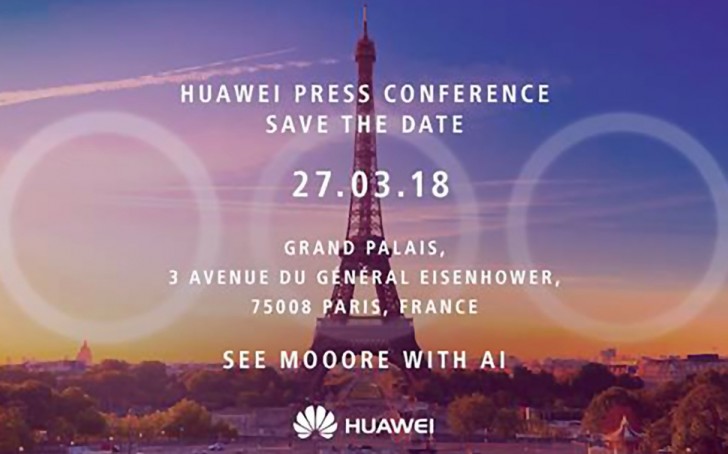 Last month, the upcoming smartphone Huawei P20 was spotted at an HTML compatible benchmark and the benchmark was revealed the model number EML-AL00 with 1,080 x 2,244px resolution, aspect ratio of 18.7:9 and will run on Android 8.0 Oreo. Now the smartphone manufacturer Huawei starts the press invites for the Huawei P20 which will be launched on 27th March in Paris, France. The press invites shows three circles which is the symbol of its triple camera setup on its rear section along with the catchline “see mooore with AI”.
Recently, the live images of the upcoming Huawei P20 Lite revealed notch at the top and also three devices Huawei P11/P20, a P11/P20 Plus, and a P11/P20 Lite are likely to be announced at the same event.

The predecessor Huawei P10 was launched in February, 2017 and it sports 5.1-inch Full HD LCD 2.5d curved display with Gorilla Glass 5 protection. It has 4GB RAM, dimension of 145.3 x 69.3 x 6.98mm and weighs 145g .It comes with the internal storage capacity of 64GB, which can be further expanded up to 256GB via microSD card slot. It is armed with Octa-Core Kirin 960 processor with Mali G71 Octa-core GPU and runs on Android Nougat 7.0 with EMUI 5.1. It has a Fingerprint sensor and comes with Hybrid Dual SIM functionality.